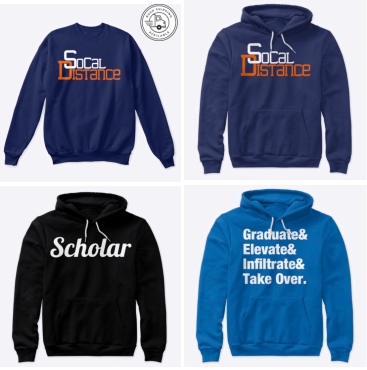 Created some merch for the 2020 vibes to promote healthy living through social distancing and a higher learning with some elementary wear. Check out the styles and options. 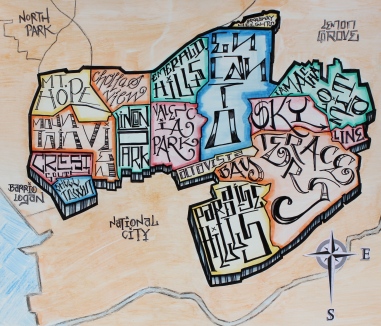 Southeast San Diego holds a special place in the hearts of its past and present residents. Like the metal pea that clinks in a can of spray paint, it stirs the spirit. Putting the old neighborhood on the map! This one’s for the home team(s). 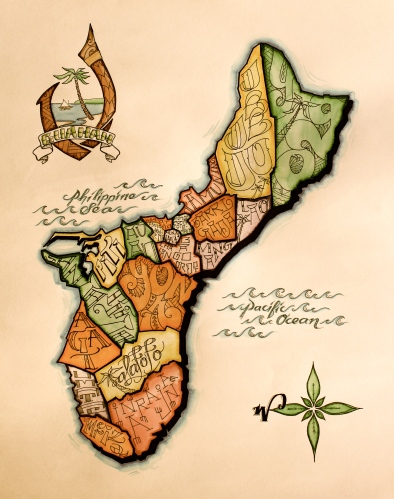 Where America’s day begins. Guam roots run deep in California. It is a U.S. island territory in Micronesia, in the Western Pacific. It’s distinguished by its tropical beaches, Chamorro villages and ancient latte stones (stone pillars). Tumon Bay is a hub with bars, shops and an aquarium. Beaches include Ritidian Point, part of a wildlife refuge, and storied Two Lovers Point. Offshore are dive sites such as Apra Harbor’s sunken warships. We got fam up in Dedido.

These hand designed fresh Masterpiece prints were first sold at the 2016 Asian Cultural Festival. Keepin’ it cherry like Auntie Mary 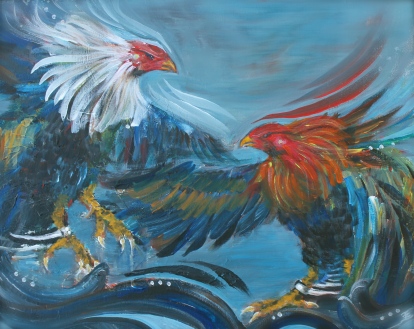 (Our interpretation of an Old Cherokee proverb)

A young boy (balong) came to his Apong (grandfather), filled with anger at another boy who had done him an injustice. The Apong said to his grandson, “Balong, hali ka dito. Let me tell you a story. I too, at times, have felt a great hate for those that have taken so much, with no sorrow for what they do. But hate wears you down, and hate does not hurt your enemy. Hate is like taking poison and wishing your enemy would die. I have struggled with these feelings many times.” “It is as if there are two roosters inside me; one rooster is good and does no harm. He lives in harmony with all around him and does not take offence when no offence was intended. He will only fight when it is right to do so, and in the right way. But the other rooster, is full of anger. The littlest thing will set him into a fit of temper.” “He fights all the time, for no reason. He cannot think because his anger and hate are so great. It is helpless anger, because his anger will change nothing. Sometimes it is hard to live with these two roosters inside me, because both of the roosters try to dominate my spirit.” The boy looked intently into his eyes and asked, “Which rooster will win, Apong?” The Apong smiled and said, “The one I feed”. 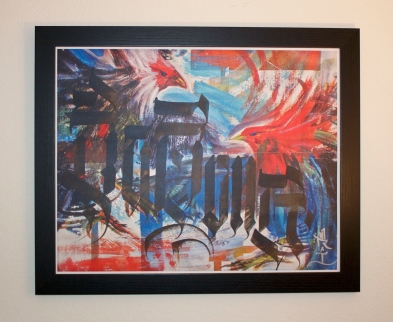 The Roosters/SABONG
This limited collaboration edition print is brought to you with the help of Grand Master Calligraffiti Artist “Ethos One” from Manila Mesa. Please check out more of his work on IG @ethosone 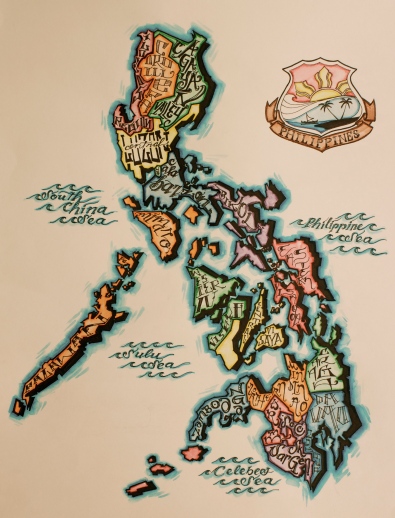 Map of the Philippines (The Mother Island) 16″x20″

This hand designed illustration is dedicated to the 7,107 islands that make up the Philippines. The Pearl of the Orient Seas. Roots.

“I remember as a little boy I ate one meal a day and sometimes slept in the street. I will never forget that and it inspires me to fight hard, stay strong and remember all the people of my country, trying to achieve better for themselves.” -Manny Pacquiao. 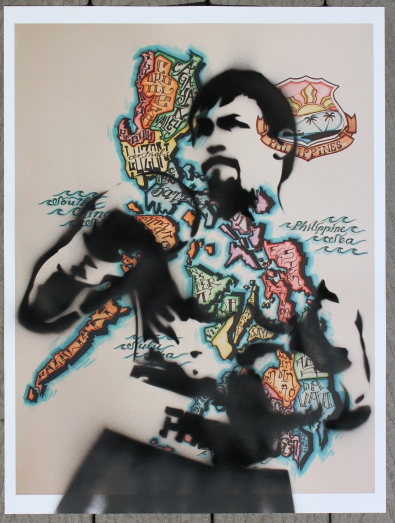 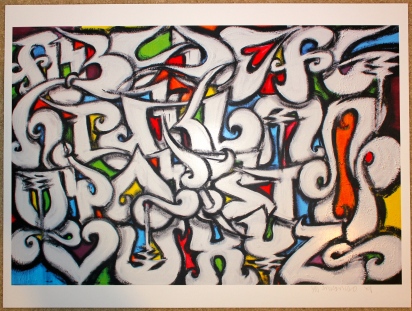 A painting based on the alphabets with a ancient filipino baybayin (indigenous writing) twist to it. 26 letters in the alphabet. They’re all a bunch of characters. 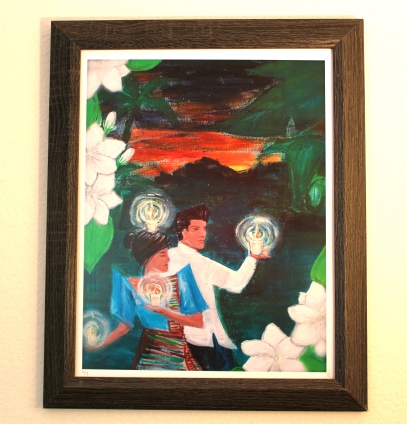 The word pandanggo is from the Spanish fandango, a dance in 3/4 time. The phrase sa ilaw is Tagalog for “in light” and it refers to the three oil lamps that a dancer has to balance — one on the head and one on the back each hand. The oil lamp is called tinghoy. Sometimes, candles in glasses are used instead of an oil lamp. 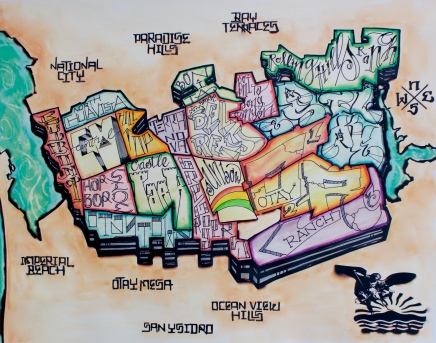 Chula Vista; Spanish for “beautiful view” is the second largest city in the San Diego metropolitan area, the seventh largest city in Southern California, the fourteenth largest city in the state of California, and the 74th-largest city in the United States. The population was 243,916 as of the 2010 census. Located just 7.5 miles (12.1 km) from downtown San Diego and 7.5 miles (12.1 km) from the Mexican border in the South Bay region of the metropolitan area, the city is at the center of one of the richest economic and culturally diverse zones in the United States. Chula Vista is so named because of its scenic location between the San Diego Bay and coastal mountain foothills. Chula Vista is also known for its low income areas on the west side (Feaster, Harborside, Castle Park, Otay), and its high income areas on the east side (Eastlake, Otay Ranch, Rolling Hills). West Chula Vista has a high to moderate gang problem, like most other areas of south San Diego County (southeast San Diego, National City, south San Diego, and Imperial Beach). 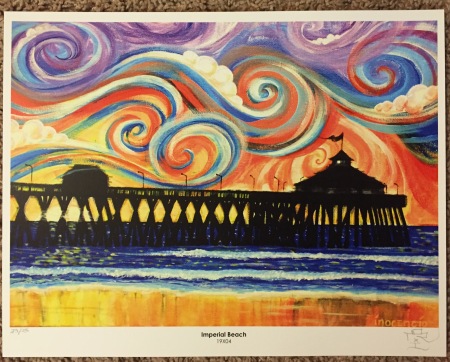 Imperial Beach is the southernmost beach city in Southern California and the West Coast of the United States. It is in the South Bay area of San Diego County, south of downtown San Diego and northwest of downtown Tijuana, Mexico.

Founded in June 1887, the city got its name from Imperial County, California. Farmers and land owners from the Imperial Valley came to the area in the late 1880s seeking cooler weather during summer months. In March 1887, over 2,000 laborers descended upon nearby Coronado, California to skillfully construct the Hotel del Coronado, the largest resort in the world at the time. A large number of the workers stayed in Imperial Beach and some would later make it their permanent paradise. 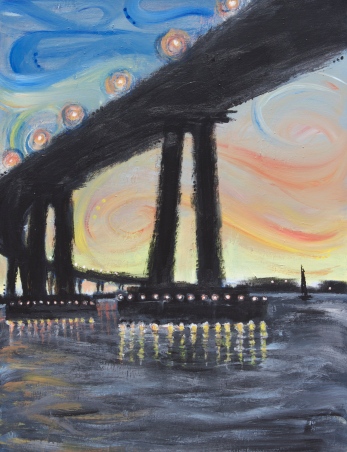 “Stay Gold San Diego” This is one of my favorite landmarks. God willing, I’ll probably paint several versions of this bridge from different angles later on in life.

Painted back in 2010, we were encouraged by locals as well as past residence of San Diego to share the “gift” by creating a print of it. Looks great framed for the house or thumbtacked in the garage/man-cave. 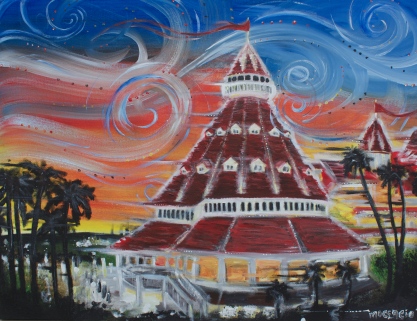 Coronado is Spanish for “Crowned”. Some consider this San Diego’s Castle. A great spot to have a staycation with the family if you have an inside connect. According to wiki, “Hotel del Coronado (aka The Del and Hotel Del) is a beachfront luxury hotel in the city of Coronado, just across the San Diego Bay from San Diego, California. It is one of the few surviving examples of an American architectural genre: the wooden Victorian beach resort. It was designated a National Historic Landmark in 1977 and a California Historical Landmark in 1970.”

When it opened in 1888, it was the largest resort hotel in the world. It has hosted presidents, royalty, and other bourgeois cats through the years. Not to say we’re not bourgeois, it’s hard to go back to hamburger helper after having filet mignon but we still fry up the spam with brown sugar when its time to celebrate. The hotel has been featured in numerous movies and books. 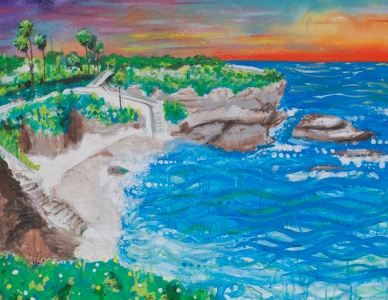 La Jolla Cove is a small, picturesque cove and beach that is surrounded by cliffs in La Jolla, San Diego, California. The Cove is protected as part of a marine reserve; underwater it is very rich in marine life, and is popular with snorkelers and scuba divers.

The swells that often roll in from the open ocean here can be rather large and strong, and so being in the water at the Cove is not always suitable for people who do not have good water skills. Evian bottled water, anyone? 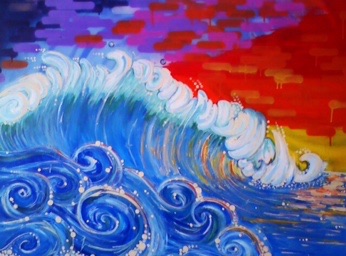 We grew up watching Kung Fu movies and learned a lot from Bruce Lee.

“Be like water making its way through cracks. Do not be assertive, but adjust to the object, and you shall find a way around or through it. If nothing within you stays rigid, outward things will disclose themselves. 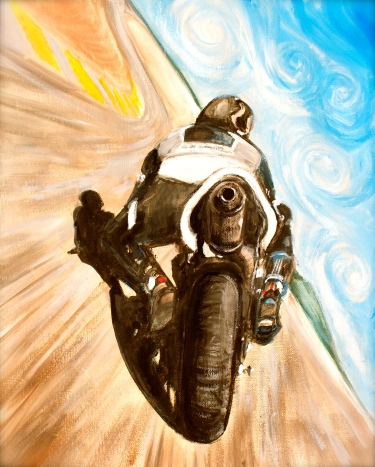 Participants in the sport and art of motorcycle roadracing. Contrary to popular opinion, most are not wreckless and do not have a death wish, but rather tend to be methodical, analytical and reasonably cautious. Motorcycle roadracing doles out severe physical punishment to those who ride beyond their abilities, and so wreckless tendencies are weeded out in short order. Having said that, it must also be noted that all motorcycle road racers share an insatiable and inexplicable need for speed.  The ambitions of a ridah! 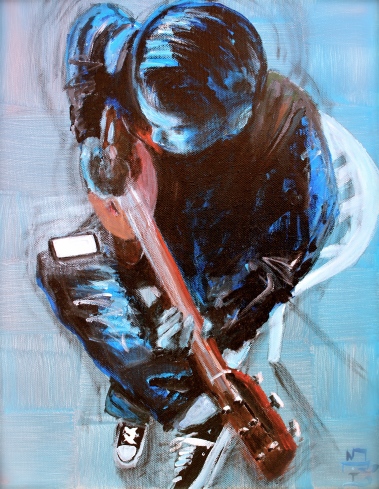 The Guitar and the Internet.
This contemporary piece is a fusion of music, art and technology. Play your favorite jam and zone out on this originally made overlapping printing style. The frequency of your music can be seen through the vibrating effect of this unique printing style.

Note: Colors represented can vary from monitor to monitor. I have done my best to represent what the printed colors will look like, but slight color differences may occur.